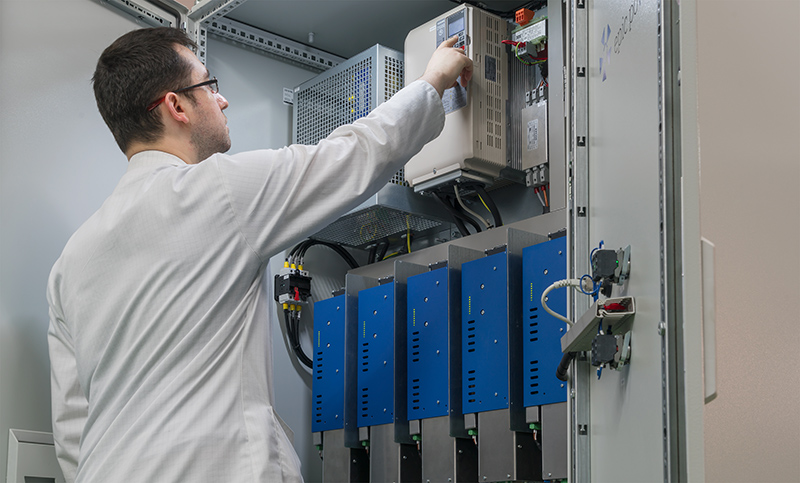 Epic Power and Yaskawa pose a new era in battery testing through an innovative modular, scalable and parallelizable regenerative system.

This solution allows significant cost savings during the tests that energy storage devices are currently subjected to and facilitates their in-house implementation, thus avoiding dependence on third parties.

The challenge of stable electrical charge in the automotive industry

According to the consulting firm Markets & Markets, the number of electric vehicles that will be on our streets is going to go from 3.2 million units globally in 2019 to more than 26 million in 2030, which represents a growth rate of 21.1% over that period.

Perhaps one of the most significant and newsworthy consequences of the popularisation of the electric car is the rapid evolution of the batteries destined to power this new fleet of sustainable vehicles. This is how Raúl Ramón, senior market development manager at Epic Power explains it: “the batteries we had five years ago offered half the capacity of those used today, so the testing needs of these devices are much more demanding. The key is to have a flexible system that can be easily adapted to the reality of a technology that is constantly moving forward”.

The evolution in the development of batteries has been based on the increase in their performance and a significant reduction in their costs. The unexpected consequence of this move forward is that the true limits of the technology are not yet certain – its effective life, the optimum operating temperature and what happens if conditions are not always ideal, the life cycles of the device, etc. – and its instability has increased: not all batteries available on the market are suitable for use on the commercial circuit. In this scenario, the battery testing phase takes on special significance.

Until now, given the limited demand that existed, this process was carried out in laboratory environments, with the provision of standardised equipment, which is now having problems responding to the new developments in the technology: “The current testing systems are not flexible. These answers are quickly becoming obsolete as they do not have power electronics configurations that allow the testing system to be adjusted to the new needs. They are limited in terms of charging current and are not up-to-date in terms of discharging”. Furthermore, these testing centres are not agile enough to meet the current demand for testing.

A flexible development in response to the evolution of battery technology.

The lack of high-current industrial solutions for testing battery packs, added to the experience accumulated in bidirectional dc dc converters for battery charging in previous projects, and the specific requirements of one particular customer led Epic Power to consider designing and implementing a turnkey solution capable of revolutionising the paradigm under which these types of processes are carried out: “We set out to design a modular industrial system, with easily replaceable elements. A configurable system with open programming so that each user would be able to create specific tests according to their own needs”, details Raúl Ramón.

Epic Power’s know-how in power electronics and bidirectional continuous conversion also enabled them to configure a system that was capable of working with lithium, lead, redox and super-capacitor batteries. Yaskawa’s D1000 three-phase regenerative converter – from 20 kW – was the technology selected to turn this innovative system into a reality.

The required characteristics of the test station were clearly defined by the customer from the beginning: a robust, flexible and easily configurable system was needed that would be presented as an industrial solution allowing customers to define their own test parameters and, of course, that it would be developed with maximum cost efficiency in mind.

It was a totally revolutionary proposal with respect to the existing systems, and therefore, its technological approach had to be the differentiating factor. This is how Raúl Ramón explains it: “Traditional solutions carry out battery testing by absorbing energy directly from the grid and then injecting it back into the grid. Through the use of DC/DC converters on a shared DC bus, we verified that it was possible to recirculate the energy directly between batteries to optimise the power and the consumption the network required. With the scheme proposed by our system, the energy consumed was limited to minor losses during the testing operation”.

Under this premise, the bidirectional battery test charging and discharging station designed by Epic Power was configured as an open system, which includes everything from the test elements to the control elements.

At the heart of the station is Yaskawa’s D1000 three-phase regenerative converter, as well as an input reactor and a harmonic filter. “Although there are alternatives for bidirectional front ends, we opted for Yaskawa because of the positive experience in previous work with the team in Spain and because the initial comparison, in the design phase for the station, showed that it was the solution best suited to the defined needs. It offered simplicity of integration and its price with respect to the power provided was highly competitive”. In addition to the solution itself, Yaskawa provided technical support in the definition of the system’s electrical layout, as well as in the resolution of shielding problems that arose during the initial activation.

In addition to other electrical elements for battery and network protection, precision measurement of current, voltage, temperature and control, the station has a management and control system built on open Python software. “Depending on the battery being tested and the test objective, the required test is defined within a range of available options. In addition, thanks to the configuration established on Python, the user can define full trial tests since it starts from a fixed base code and another one which can be modified by the user”, clarifies Ramón. In this sense, the system controller is in constant communication with the user’s computer to define the tests, monitor them in real time, as well as to save and process the data.

The proposal is now deployed for 48 V battery packs, which have 5.5 kW power channels that can be paralleled across their full range. “For higher voltage battery packs, as is the case for electric vehicles, the installation of channels between 10 kW and 30 kW is carried out, making it possible to run fully in parallel and, thus scaling the station up to higher power requirements using a custom dc dc converter “.

In fact, the possibility of running the system in parallel is a key aspect of the proposal: “It is possible to make more than one battery cycling system work simultaneously, either to respond to an increase in working channels or in the event of a need for a higher cycling power”, details Raúl Ramón.

As these are standard industrial elements, the expected life for the technologies that make up the solution is greater than 20 years. Likewise, as detailed by Epic Power, the protection and monitoring elements are easily replaceable as they are standard electrical and automation devices: switches, fuses, terminals, PLC, etc.

Beyond the electric car: the solution that sustainable industry needs.

The solution designed by Epic Power with Yaskawa technology is fully operational and is applicable today to industries that use batteries with different chemistries to encompass the working conditions and limits of these devices. “It enables tests on capacity, impedance, efficiency, response to high and low temperatures, degradation cycles or accelerated life, and state of charge and life, among other kinds of testing”, they explain.

The benefits provided by the solution have already been confirmed by Epic Power in the first implementation of the system. It allows the contracted power required to be reduced by up to 30%; and an up to 70% reduction in the energy consumed has been achieved by making it possible to configure the tests so they recirculate energy between batteries.

This solution also reduces the cost of acquisition by between 2 and 4 times compared to a similar laboratory-based power solution, offering total flexibility in test configuration as it operates with free software, thus ensuring a long useful life for the system as it is built with industrial elements that are easily replaceable by the user.

According to Ramón, the system is an excellent alternative for battery pack manufacturers -currently Epic Power is working so that the cell integrators themselves can quickly and efficiently test their packs during the production process-, battery users, companies focused on the circular use of used batteries –in addition to re-labelling/new life–, electric vehicle manufacturers, technology centres and universities that have battery testing laboratories and want to update them, as well as the intra-logistics sector, which, given the advances in AMRs and AGVs, is decisively shifting towards electric mobility.

This website uses cookies so that we can provide you with the best user experience possible. Cookie information is stored in your browser and performs functions such as recognising you when you return to our website and helping our team to understand which sections of the website you find most interesting and useful.

Strictly Necessary Cookies should be enabled at all times so that we can save your preferences for cookie settings, language and other basic settings.

If you disable this cookie, we will not be able to save your preferences. This means that every time you visit this website you will need to enable or disable cookies again.

This website uses Google Analytics to collect anonymous information such as the number of visitors to the site, and the most popular pages.

Please enable Strictly Necessary Cookies first so that we can save your preferences!